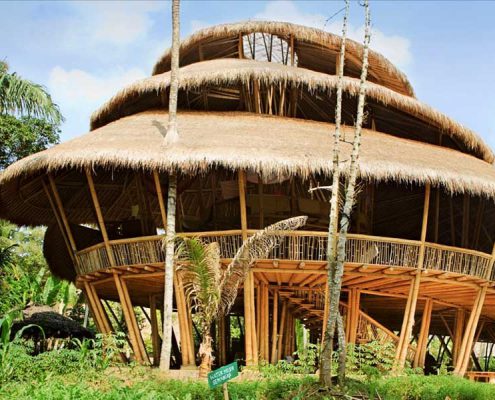 I grew up in a very small village in Canada, and I’m an undiagnosed dyslexic. I had a really hard time in school. In fact, my mother told me eventually that I was the little kid in the village who cried all the way to school. I ran away. I left when I was 25 years old to go to Bali, and there I met my incredible wife, Cynthia, and together, over 20 years, we built an amazing jewelry business. It was a fairy tale, and then we retired. Then she took me to see a film that I really didn’t want to see. It ruined my life — (Laughter)“The Inconvenient Truth” and Mr. Gore. I have four kids, and even if part of what he says is true, they’re not going to have the life that I had. And I decided at that moment that I would spend the rest of my lifedoing whatever I could to improve their possibilities. So here’s the world, and here we are in Bali. It’s a tiny, little island — 60 miles by 90 miles. It has an intact Hindu culture. Cynthia and I were there. We had had a wonderful life there, and we decided to do something unusual. We decided to give back locally.

1:53And here it is: it’s called the Green School. I know it doesn’t look like a school, but it is something we decided to do, and it is extremely, extremely green. The classrooms have no walls. The teacher is writing on a bamboo blackboard. The desks are not square. At Green School, the children are smiling — an unusual thing for school, especially for me. And we practice holism. And for me it’s just the idea that, if this little girl graduates as a whole person, chances are she’ll demand a whole world — a whole world —to live on. Our children spend 181 days going to school in a box. The people that built my school also built the prison and the insane asylum out of the same materials. So if this gentleman had had a holistic education, would he be sitting there? Would he have had more possibilities in his life?

3:05The classrooms have natural light. They’re beautiful. They’re bamboo. The breeze passes through them.And when the natural breeze isn’t enough, the kids deploy bubbles, but not the kind of bubbles you know. These bubbles are made from natural cotton and rubber from the rubber tree. So we basically turned the box into a bubble. And these kids know that painless climate control may not be part of their future. We pay the bill at the end of the month, but the people that are really going to pay the bill are our grandchildren. We have to teach the kids that the world is not indestructible. These kids did a little graffiti on their desks, and then they signed up for two extra courses. The first one was called sanding and the second one was called re-waxing. But since that happened, they own those desks. They know they can control their world.

4:14We’re on the grid. We’re not proud of it. But an amazing alternative energy company in Paris is taking us off the grid with solar. And this thing is the second vortex to be built in the world, in a two-and-a-half meter drop on a river. When the turbine drops in, it will produce 8,000 watts of electricity, day and night.And you know what these are. There’s nowhere to flush. And as long as we’re taking our waste and mixing it with a huge amount of water — you’re all really smart, just do the math. How many people times how much water. There isn’t enough water. These are compost toilets, and nobody at the school wanted to know about them, especially the principal. And they work. People use them. People are okay. It’s something you should think about doing. Not many things didn’t work. The beautiful canvas and rubber skylights got eaten by the sun in six months. We had to replace them with recyclable plastic. The teachers dragged giant PVC whiteboards into the classrooms. So we had some good ideas: we took old automobile windshields, put paper behind them and created the first alternative to the whiteboard.

5:35Green School sits in south-central Bali, and it’s on 20 acres of rolling garden. There’s an amazing river traveling through it, and you can see there how we manage to get across the river. I met a father the other day; he looked a little crazed. I said, “Welcome to Green School.” He said, “I’ve been on an airplane for 24 hours.” I asked him, “Why?” He said, “I had a dream once about a green school, and I saw a picture of this green school, I got on an airplane. In August I’m bringing my sons.” This was a great thing.But more than that, people are building green houses around Green School, so their kids can walk to school on the paths. And people are bringing their green industries, hopefully their green restaurants, to the Green School. It’s becoming a community. It’s becoming a green model. We had to look at everything. No petrochemicals in the pavement. No pavement. These are volcanic stones laid by hand.There are no sidewalks. The sidewalks are gravel. They flood when it rains, but they’re green.

6:49This is the school buffalo. He’s planning to eat that fence for dinner. All the fences at Green School are green. And when the kindergarten kids recently moved their gate, they found out the fence was made out of tapioca. They took the tapioca roots up to the kitchen, sliced them thinly and made delicious chips.Landscaping. We manage to keep the garden that was there running right up to the edge of each of the classrooms. We dropped them gently in. We made space for these guys who are Bali’s last black pigs.And the school cow is trying to figure out how to replace the lawnmower on the playing field.

7:36These young ladies are living in a rice culture, but they know something that few people know in a rice culture. They know how to plant organic rice, they know how to look after it, they know how to harvest and they know how to cook it. They’re part of the rice cycle and these skills will be valuable for them in their future. This young man is picking organic vegetables. We feed 400 people lunch every day and it’s not a normal lunch. There’s no gas. Local Balinese women cook the food on sawdust burners using secrets that only their grandmothers know. The food is incredible.

8:19Green School is a place of pioneers, local and global. And it’s a kind of microcosm of the globalized world. The kids are from 25 countries. When I see them together, I know that they’re working out how to live in the future. Green School is going into its third year with 160 children. It’s a school where you do learn reading — one of my favorites — writing — I was bad at it — arithmetic. But you also learn other things. You learn bamboo building. You practice ancient Balinese arts. This is called mud wrestling in the rice fields. The kids love it. The mothers aren’t quite convinced.

9:06We’ve done a lot of outrageous things in our lives, and we said, okay, local, what does “local” mean?Local means that 20 percent of the population of the school has to be Balinese, and this was a really big commitment. And we were right. And people are coming forward from all over the world to support the Balinese Scholarship Fund, because these kids will be Bali’s next green leaders. The teachers are as diverse as the student body, and the amazing thing is that volunteers are popping up. A man came from Java with a new kind of organic agriculture. A woman came from Africa with music. And together these volunteers and the teachers are deeply committed to creating a new generation of global, green leaders.The Green School effect — we don’t know what it is. We need someone to come and study it. But what’s happening, our learning-different kids — dyslexic — we’ve renamed them prolexic — are doing well in these beautiful, beautiful classrooms. And all the kids are thriving.

10:20And how did we do all this? On giant grass. It’s bamboo. It comes out of the ground like a train. It grows as high as a coconut tree in two months and three years later it can be harvested to build buildings like this. It’s as strong and dense as teak and it will hold up any roof. When the architects came, they brought us these things, and you’ve probably seen things like this. The yellow box was called the administration complex. (Laughter) We squashed it, we rethought it, but mainly we renamed it “the heart of school,” and that changed everything forever. It’s a double helix. It has administrators in it and many, many other things.

11:12And the problem of building it — when the Balinese workers saw long reams of plans, they looked at them and said, “What’s this?” So we built big models. We had them engineered by the engineers. And Balinese carpenters like this measured them with their bamboo rulers, selected the bamboo and built the buildings using age-old techniques, mostly by hand. It was chaos. And the Balinese carpenters want to be as modern as we do, so they use metal scaffolding to build the bamboo building and when the scaffolding came down, we realized that we had a cathedral, a cathedral to green, and a cathedral to green education. The heart of school has seven kilometers of bamboo in it. From the time the foundations were finished, in three months it had roofs and floors. It may not be the biggest bamboo building in the world, but many people believe that it’s the most beautiful.

12:47So, Mr. Gore, thank you. You ruined my life, but you gave me an incredible future. And if you’re interested in being involved in finishing Green School and building the next 50 around the world, please come and see us.

A small gallery
Scroll to top